All weapons are available in six tiers, with all weapons excluding grenades available in four different rarities. There are eight possible weapons for each skill except grenades which have six. The extra weapons occur at item levels 2 and 4. Their names in the game files indicate as being included in a later update.

For simplicity all the guns share the ammo resource even though different ammo would be required in real life. The maximum ammo a jeep can carry is 120 bullets after all upgrades have been purchased. Additional ammo is acquired from ammo crates, which can be found after battles or bought from traders. Crates come in three sizes small (10 bullets), medium (15 bullets), large (25 bullets). Occasionally you'll encounter traders who will exchange fuel for bullets and vice versa.

An important point to consider when aiming at a target in cover. Your chance to hit is calculated as follows: (10 + (DEX [including bonuses] x10) + weapon accuracy modifier + skill tree modifier + off hand item modifier). There seems to be a hidden +10% to hit for shotguns and sniper rifles in build 1.1.6, making users of these weapons more accurate than you would expect. E.g. Georgette with DEX 5, +10 sniper accuracy skill, +10 weapon accuracy and an off hand item granting +10 sniper rifle accuracy will have a 90% chance to hit a target in cover. Whereas Leonara with DEX 2, no perks and an assault rifle with its -5 accuracy will have a 25% chance to hit someone in cover.

Grenades are included here as their stats are more in keeping with weapons than the supplies they consume.

The rarity of a weapon will be signified by the colour of its border. White is common, blue is rare, purple is epic and gold is legendary. All weapons grades can be found as loot. Merchants have similar odds of stocking rare, epic and legendary items.

White items are the basic stats for the weapon. Signified with worn or tarnished in the name.

There are usually three possible random buff options for any given weapon. These will vary between weapon types, but don't vary between weapons of the same type. e.g. all pistols share the same common buffs list, but the buffs list on a sniper rifle is different. Otherwise the weapon stats for armour shredding etc don't alter.

As per rare items, the list of possible buffs doesn't vary within a weapon type. There are usually 3 weapon stat buffs and 4 minor (+1) character buffs that can be randomly chosen from. The list of character buffs is the same for all weapon levels within a weapon type. e.g. all epic pistols can potentially provide +1 dexterity. Some epic weapons exhibit improved range over the common version.

Gold items each have a unique list of potential modifiers that can include: weapon stat modifiers, altering the damage type, have small or large character stat buffs such as +1 agility or +2 endurance or the ability to unlock perks such as Engineer. Some legendary weapons exhibit improved range over the common version. They are signified with splendid in the name. Min damage increased by 25%; max damage increased by 30% vs common.

The stat buffs and skills can make a low level epic or legendary weapon desirable for longer due to the benefits it provides even though it's damage is lower. E.g. A sniper rifle with plus 2 Dexterity for Veduti whose default Dexterity is 2.

All items listed below show the stats for their COMMON version only for simplicity.

Some guns have differing ranges with Common & Rare having the range listed below; Epic & Legendary with an asterisk (*) in their range exhibit the +1 max range.

The list of possible attributes for each legendary weapon are listed beneath the common versions to show how the weapon can be improved.

When a weapon is held by someone, their perks are automatically shown in the weapons profile to make comparison between the currently equipped weapon and a potential swap easier to see.

The only weapon that can be either a primary weapon or secondary weapon. In the event of equipping two knives, the one in the primary weapon slot takes priority for calculating damage.

A knife will always be better than your fist. From the game data, the maximum damage a punch can deal is 15 without scoring a critical hit. Knives also benefit from being able to ignore all armour, making them useful against well armoured targets.

Legendary weapon buffs One item from each column is chosen at random. The Bowie knife is the only legendary weapon to have the same stat capable of being buffed by +1 or +2 (Dexterity); should both be randomly selected you can have a +3 Dexterity Bowie knife.

A +3 Dexterity knife is a powerful aiming assist given that even the unique artifacts generally roll with no more than +2 to a stat, barring Petru's Amulet. It will turn average shooters into marksmen at the cost of significantly reduced melee damage vs a tier 5+ knife. 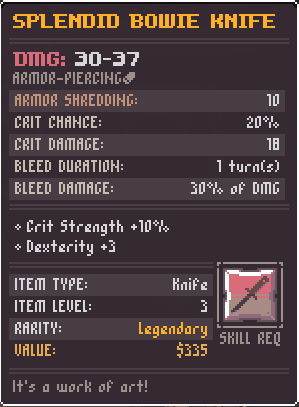 Useful for tackling two enemies in different directions at once when your bravery allows. Deals less damage than an assault rifle but is slightly more accurate and doesn't need to reload as often. Has the same level of armour shredding as an assault rifle.

Legendary weapon buffs One item from each column is chosen at random.

N.B. Annabelle was wielding this pistol and her perks were +8% accuracy, +15% crit chance, +6 crit damage at the time of the screenshot. The splinter damage made it almost useless against shock troopers.

Longer range than most other weapons. Good damage output but has a mild accuracy penalty making shooting at defended enemies trickier. Just make sure you have enough bullets in the clip before attempting a burst fire attack (1 per target). Burst fire can also hit the user if you place any part of line of red aiming tiles on them.

Legendary weapon buffs One item from each column is chosen at random; maximum 3 upgrades permitted. Burst spread or the +1 stat bonus can occur but not both on the same weapon.

Highest unmodified damage output of all the weapons but is offset by its small magazine size; with the shotgun blast special attack consuming 2 ammo. A quirk in 1.1.6 means you can perform the blast attack provided you have 1 bullet, even though it states it requires 2 ammo.

A weapon that needs reloaded frequently, so is good to pair up with a knife or grenade. Splinter damage is more easily stopped by armour, with the target's armour value being doubled, thus neutralising this weapon's potency when facing well armoured targets. Takes practice to use to full effect.

Legendary weapon buffs One item from each column is chosen at random; maximum 3 upgrades permitted. The +1 stat bonus or the altered blast reach can be generated but not both. 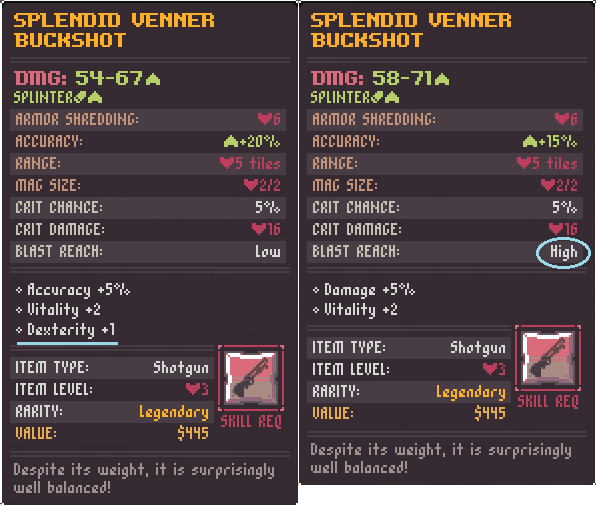 Longest range available to the weapons in game. Offset with the lowest damage per hit. Useful for shredding armour on tough foes from afar to soften then up for the rest of your party and acting as a guard through use of ambush. Snipers with a high critical hit chance have better odds of a one shot kill on exposed targets, whereas snipers with very high accuracy will render cover obsolete.

Legendary weapon buffs One item from each column is chosen at random; maximum 3 upgrades permitted. The Willoughby Ghillie can have either a +1 stat bonus or an improved ambush angle but not both as they are considered of the same priority.

Designed to rip through enemy armour and leave the victim vulnerable to follow up attacks; has a damage output and range equivalent to a pistol. Is also the only gun not to consume ammo. The downsides are it's poor accuracy against targets in cover and that critical hits improve the armour shred not damage dealt. Best used in conjunction with a shotgun user when facing tough targets.

Legendary weapon buffs One item from each column is chosen at random. Of all the legendary weapon tables, the disintegrator has only 2 possible sets to pick from with a 3:5 split, making this the only weapon class that is somewhat predictable. +3 reflexes on a legendary weapon is theoretically possible, though there may be rules that prevent this from occurring.

You are limited to the number of supplies in you inventory as to how often you can launch these accurate but somewhat variable bundles of explosive. They are also as effective as a disintegrator at shredding armour.

Each character can throw a maximum of two per combat, with a maximum of 8 grenades being used in one combat should your team composition allow it.

A great way to have fun but at the risk of running out of healing and repair items when you really need them.