There are two factions that you will encounter in combat during your adventures, the Nazis and the Brotherhood of Khonesh. Both factions are listed in the codex, but each unit entry is locked until you've had your first encounter with that unit.

Regarding the Bait skill and it's ability to distract certain enemy. It acts as a grenade with a blast radius of 6 tiles and only effects enemies that were covered by the red blast template prior to the start of their turn; anyone moving into the range of the Bait afterwards is not affected. The affected units will have a meat joint icon next to their health bar when under the influence of Bait.

The Psychic Control skill will only work on humans. Dogs, Battle hounds, Zombies & Sporebearers are immune to its effects. There must be an enemy within 10 tiles of the caster and the model must be capable of making an attack without moving from their current position. Their possible targets will be shown by a red tile. In the event of two or more viable targets, one is randomly selected.

The first faction you encounter on your travels in North Africa and the Middle East.

For those expecting the Swastika, the game developers are a small German studio and have re-designed the logo using the same colours in order to comply with German law.

The main enemy ranged combatant, especially in your early adventures. Carries an assault rifle. They don't wear any armour but have a sizeable health meter that means they usually need 2 hits to kill unless using a shotgun or assault rifle. Will generally move towards you, whilst attempting to use cover and supporting fire tactics, unless severely injured when they will withdraw.

Aggressive alsatians. They are highly mobile but do not use cover, instead choosing to home in on the nearest party member. Their bite attack has a one square range. Unarmoured and can be taken down with one shot from an assault rifle or shotgun; pistols and sniper rifles won't always guarantee a one hit kill. You have the option of altering how the dog dies within the options menu, if you find the sight of their death upsetting.

Specialising in close quarters attacks, these troops wear medium-heavy armour and carry shotguns. Their health is lower than that of soldiers and snipers due to their armour. They are easily distinguished by their metal face plates. Due to the short range of their guns they will actively move towards you to engage the nearest target. Whilst their armour is intact, the easiest way to kill them is a knife.

These soldiers chose to wear no armour including a helmet, making them easy to identify on the battlefield. They tend to have slightly less health than a trooper but will generally move away from your party whist maintaining a clear line of sight, either for a direct attack or to protect an area through use of ambush.

The healer for the Nazis. Rarely makes an appearance on the battlefield; however they are very easy to spot with their white helmet and tabard. They wear medium-heavy armour and carry a pistol. They are capable of healing wounded enemy in close proximity for around 40HP. Consider them a priority target in order to prevent prolonged battles. More common at higher difficulties.

These are the most tactically astute enemy you'll face. They are equipped with a pistol, wear no armour but have around 50% more health than the average Nazi soldier. Their special ability is being able to command another unit on the battlefield to carry out a second attack in exchange for surrendering their own attack. This ability can see one of your units felled if they are out in the open and near an attacker when these guys are on the battlefield.

A modified attack dog who possesses a larger health pool, and some very light armour. They are signified by their red eyes. Otherwise there is little difference between the two for behaviour, beyond their ability to inflict bleed for two turns on anyone they bite. More commonly seen at higher difficulties.

It is debatable as to whether these members of the Nazi forces are human or cyborg; they wear a full face mask with yellow eyes. They have moderate health combined with heavy armour (around 3HP to every 2AP) and carry disintegrators. They will quickly render your armour useless, thus softening you up for other units to attack. Thankfully they are an uncommonly encountered unit until you reach the fourth adventure.

A cult who's senior members practise necromancy and require their followers carry out human sacrifices, as shown by the number of grisly trinkets (scalps, sacrificial bowls and necklaces made of fingers) you recover after battle against them and the number of bones strewn around the battlefield. The bulk of their combat forces are undead abominations. They are not working in collaboration with the Nazis.

This faction is the default enemy for the third and fifth adventures. However they can also appear at random during the other three adventures, with the odds of an appearance improving as the adventure progresses into later map sectors.

The regular human members of the Brotherhood. You will face relatively few of them in a skirmish against the Brotherhood. When you do, expect them to throw sulphur pots to shred your armour and throw knives to deal damage. They have a range comparable to a pistol for their attacks and don't wear armour. However they are generally found to have a sizeable health bar, that is slightly better than a Nazi trooper of the same level.

This unit will use cover to protect itself from your guns, and rarely charge towards you preferring to be an elusive target. 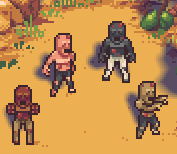 Your classic undead nightmare: slow, dim-witted and dangerous to get up close with. They can move 5 squares per turn. You can distract them like dogs with the use of bait. They also tend to die relatively easily with their disregard for tactics and a HP that is usually low enough to be dealt with by a pistol or assault rifle round. They have armour equal to half their HP. However beware of attacking them in their melee range, as they will score a retaliatory blow should you fail to kill them with a melee or point blank ranged attack. They are also capable of healing themselves for 20HP should they make base contact with a corpse from either side.

They might appear similar to Zombies but act as if they have some semblance of a brain as they are not attracted to bait. They have around twice the health of a Zombie but possess no armour. However what makes these undead truly dangerous is that they are able to spew a corrosive projectile at your party, from around 7 tiles away. Prepare for your team to lose their armour quickly when facing several of these noxious monsters. They also have a deadly surprise for their attackers, as they explode on death dealing damage akin to a sulphur pot that has been centered on them. This makes it suicidal to confront them in melee.

The explosion on death can occur for a second time should they be resurrected by a high priestess.

This is the only enemy unit that you don't have to kill in order for a map to be considered cleared. They are immobile undead who spew an entangling projectile up to 10 tiles from their position. Any unit that suffers a successful direct hit will lose all their movement options in the coming turn excluding dash. You will not suffer any damage to health or armour. They have around 50% more health than a standard zombie should you need to destroy one. Their role is to pin you in place in preparation for the zombies to arrive.

Easy to identify on a map at night; if you're lucky they'll have a poor deployment location that renders them useless.

The leaders of the Brotherhood of Khonesh. With their headdress and staff, they present an obvious target in comparison to the rest of their forces who are not easy to identify during deployment at night.

They posses armour equal to half their health, requiring them to be softened up before the likes of a sniper rifle or pistol can deal significant damage. They launch fire balls as their projectile of choice, which are capable of dealing around 35 HP a hit to an armoured party member. They also possess the ability to raise a fallen unit - not sporebearers. The unit can be up to 8 tiles away and is restored with approximately half health. You will encounter only one in a skirmish and even then it will be towards the latter part of the adventure, due to their potency. Like cultists they will also use the cover available to them.

Best taken out of action as soon as possible to reduce the ammo & supplies expenditure that neutralising the resurrected brotherhood will incur.