Pathway is a series of 5 adventures, with the difficulty increasing by one tier in each new chapter.

In normal mode you can repeat each adventure as often as you like once you have completed it, whereas Hardcore mode requires you to move on to the next chapter of the adventure with no chance to go back. Hardcore is recommended for experienced players.

The difficulty level will also influence the time of day your adventure begins: Early morning = 1,4; Mid-afternoon = 2; Night = 3,5. Night fighting makes it harder to distinguish the brotherhood cultists from infected when their backs are facing you. The day-night cycle for chapter 5 is Night for sector 1, Early morning for sector 2.

In adventures 2 & 4 you will occasionally encounter the Brotherhood in random events. Some playthroughs will see them have a greater presence than others. You won't encounter Nazis in adventures 3 & 5.

The only guaranteed encounters are the ones at the start and end of each sector. They will ALWAYS offer the same options and number of rewards. e.g. Entering sector 2 of the wrath of god will always see you be provided with ammo, fuel and supplies from a wrecked jeep. The only variable is quantities.

In normal mode you can change the enemies population density before setting out on your adventure along with the amount of supplies you begin with. Once you have begun your adventure you can not change the settings should you dislike your choice. Upgrades to the jeep will allow you to store more loot, Fuel, Ammo and Supplies. It does not mean that you will automatically begin with a very well stocked jeep.

The only thing you can't do prior to departing on another adventure is change the equipment of all the party members. e.g. See who in your unselected party could benefit from the rare grade heavy armour you found and is currently in your jeep, when all your current team can't wear it. You can go into the pre-departure screen to inspect all your characters equipment and compare versus the contents of your jeep, but any changes you attempt to make won't be saved. You must depart on an adventure for the changes to be saved.

In hardcore mode several changes are made: the entire roster of 16 characters is unlocked from the beginning along with the jeep being fully upgraded and your wallet holding $500 to start your adventure. Starting supplies are determined as per a regular adventure, along with the three person cap for the first mission. From mission 2 onwards you can begin an adventure with a party of four, should you have recruited anyone. The caveat is all 16 characters begin with Level 1 items, so don't think you can get a level 4 shotgun early on by choosing Dr Chandra. Also all achievements are deactivated to prevent you receiving free ammo, fuel, supplies or weapons.

The game difficulty has been raised, so expect at least 5 enemy per encounter when the slider is set to the far left and the quality to be challenging - level 2 on your first adventure, level 7 during the last adventure. The upshot is a greater frequency of high quality loot.

All deaths are permanent should you fail to revive a KO; the hospitalisation feature is deactivated. All ammo, fuel and supplies carries over between adventures making resource management essential. You will be provided the opportunity to buy extra fuel (5 to 8 canisters depending on adventure chapter) at the start of a new chapter from chapter 2 onwards, but that is it. You will have to find extra ammo & supplies on your travels, should you have ran out. Make sure you have a spare medkit and repair kit in the jeep, as unfortunately you can't retrieve anything from a fallen party member.

No one can be swapped out unless you find a fifth character, should you find the party mix not to your liking. All new recruits join at level 1 (even during chapter 5), so beware of taking characters with low intelligence as they will take an age to level up. Expect to hit level 5-6 with an intelligence of 5, but level 4-5 with an intelligence of 2 by the time you finish chapter 5. This is based on taking the shortest route through each map sector but fighting at every opportunity.

Hardcore will see you favour Georgette & Bellamy as party members as they will find extra ammo and fuel respectively, should you wish to make the journey a little easier. You will also want to consider having knife users to save on ammo and either a medic or someone who can perform first aid or resuscitate to save your team from fatal KOs. There is nothing worse than seeing a team member die because you're out of healing options and have no chance of finishing the mission quickly.

A combat skill that becomes very useful is Headshot, as this can finish off a well armoured target that has suffered minimal damage. This is very effective when facing the likes of high level shock troopers, teslaborgs and priestess' and you've got a weaker gun.

The most effective way to travel is to plan the shortest viable journey across a map first and worry about random events when they happen. The only events to take minor detours to are merchants and campsites, as their benefits outweigh the cost of 2 fuel. Typically this method consumes 16-19 fuel per map sector with a short journey being 13 fuel. The reason to avoid running out of fuel, is that traveling on foot will remove just under 20 health per team member for each node visited. This will generally result in a team wipe in 4 moves, should you be out of supplies. 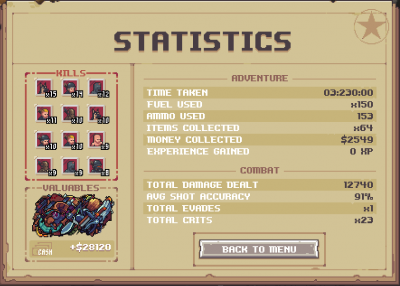 Upon completing an adventure in normal mode or completing the run of all 5 in Hardcore mode, you will be presented with a statistical performance report.

It will show (from left to right): 1) the 12 most commonly killed enemies (each tier is counted separately), ranked by the number killed. Should you have killed less than 12 different enemies, the remaining portraits will be red crosses (X).

2) the unsold valuables that were in your jeep, presented in a jumbled pile should you have a lot of stuff, and how much cash has now been added to your reserve now the adventure has been completed. Note: should you have not sold anything to a merchant, it is possible to acquire over $9,999 worth of stuff, but as your personal carrying limit is $9,999 the excess is lost.

time taken to complete is in hours then (minutes/decimal hour fraction)?

money collected covers bank notes and coins found that will directly increase your bank balance along with items that have been traded with a merchant to generate more wealth.

experience gained is only counted for characters who have yet to reach level 6 at any point during an adventure. Once a character reaches level 6 the game will stop tallying all XP they could have earned. Any report with zero XP earnt signifies a team comprised of all level 6 party members at departure.

total damage dealt covers all damage you've inflicted on your foes, including the overkill.

shot accuracy covers any attack made with a gun. Grenades and knives don't influence this score. For a higher average attack targets out in the open and find ways of raising your Dex for hitting targets in or near cover.

Total evades & crits signify how many times your entire team has successfully evade an attack or scored a critical hit.